We’re back to this. I’d been waiting for an Amazon order to make it’s way to my house, and that finally happened.

As we had been playing, there were a few things that were starting to box in some of the more creative play I wanted to be able to allow. We only had 6 sided dice- and we likely could have made that work for a bit longer, but I was trying to bring an every-growing degree of complexity to the game, so… I bought some dice. A big bag, actually- it had about 100 dice in it (D4, 6, 8, 10, 12, 20, & Percentile). Those should give us a better ability to modulate tasks- a monster you need to defeat can exist on a difficulty scale of 1-20 now, instead of just 1-6. That will help as I start to make the games serialized.

Yup. We’re starting to carry data from one game to the next- so weapons you amass come with you, money carries with you (more on this in a second…), and attributes your character uses exist over a scale longer than a single sitting of the game. I’m hoping the longer narrative structure helps to maintain some of the enthusiasm the kids currently have- it also allows us to not have to re-built resources for their characters. Every. Time. We. Play.

I’ve also introduced money into the game. I wanted to build it in for two real reasons- the first is to introduce some of the most basic elements of economics. Rare things cost more. Common things cost less. You only have so much money- and when it runs out, you need to make choices about what to do. And so on. Also (point 2!), MATH! Right now, coins are just coins- pennies in our case- and you have however many you have. But soon, as the amounts increase, we can introduce nickels, dimes, and quarters to the mix. Some good experience with the math of money.

Besides the coins, I wanted something less linked to a numerical value. That is to say, a nickel carries the value of 5 with it- and I wanted “money” for which the value could change- it could be worth more or less at any given time. Clearly, what we needed was jewels. Did you know Amazon sells jewels? Yup. Nice, big, colorful “pirate jewels” made out of plastic and sure to please. Got a big bag of those too.

Clearly, we’d outgrown our previous modest box’o’stuff, and I needed to upgrade. Home Depot sells these lovely small part boxes, and I picked up one- the girls really enjoyed sorting the different (and exciting) types of dice into bins. Heck, that was an activity for a night on it’s own. All that looks like this: 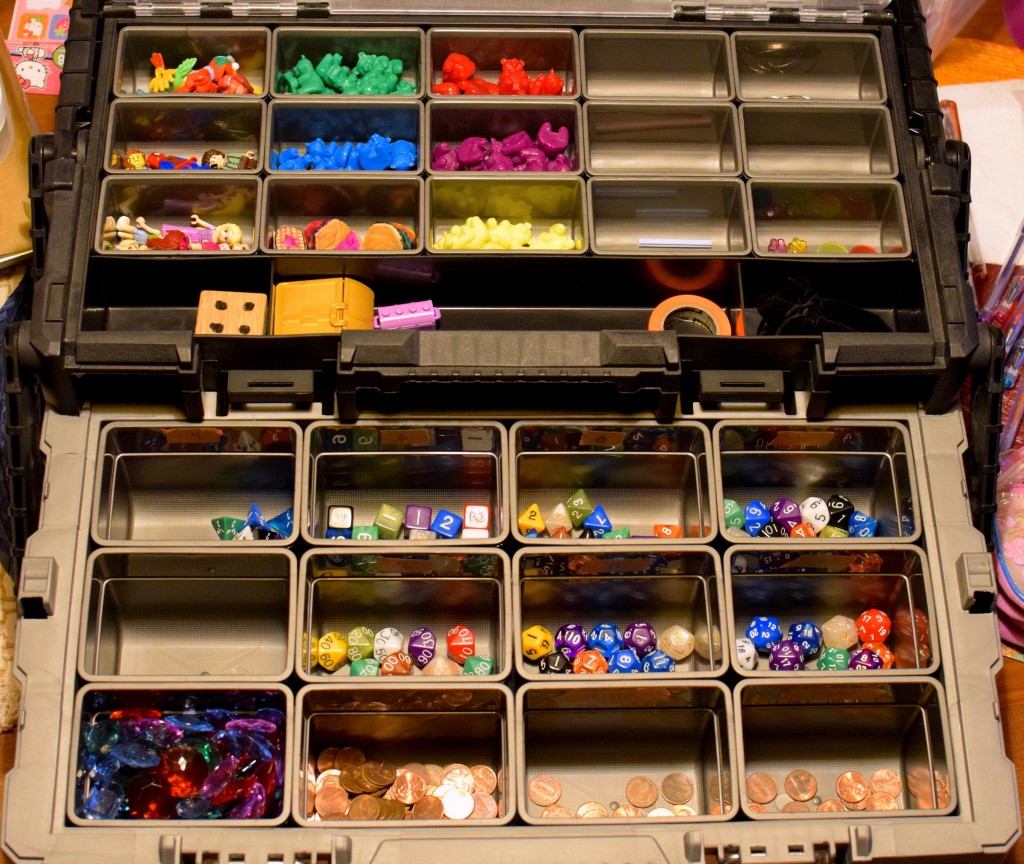 That mostly took care of the manipulatives we needed (so far), and I moved on to making the game more modular and unpredictable. What I needed, really, was a stack of interaction parameters that we could draw from- when the map says “monster here,” you’d draw a card to see what sort of monster you were fighting and what their properties were. Amazon sells big boxes of blank playing cards that are totally awesome for this- they’re just the right size, they have rounded corners and the right finish on them, and they take sharpie just great. Got a box of those, too. Cheap! And there’s like 500 in the box, so we’re good to go for a bit.

The next step is to sit down and actually make the cards– I think I’m going to have a brainstorming session with the girls about types of monsters and baddies and whatnot, and then I’ll spend some free time (HA!) making a stack of cards and attributes based on those notes. I suspect those stacks will be a constantly changing and evolving sort of thing. There are always new types of monsters (and good things, too- Wizards and Elves and whatever else they think up…) to be added, and the properties are always up for debate. I’ll need to figure out how to keep the stacks organized- though for the short term, a colored dot on the back of each type of card category should do the trick. Pics of those to come, as, you know, I actually make them.

I also want to build out a couple of other stacks of cards, too. Items (and they’re properties) and Interactions (and their rules) should probably get made, and I’m still working out a reasonable (and adaptable) economy for things like “Health” and whatever other things we can work out.

Looking over this (and the last) post makes me pretty sure there will be a Part 3 to this. Dunno when, but there you go.