We’ve covered how we made the board, and the manipulatives (and tools) we used to build out the game thus far- but we haven’t talked about the variables we’ve constructed to keep each round of the game from being repetitive.

We needed things to interact with during the game- Bad Guys, Good Guys, and neutral characters that would give us social interactions. And while I could write these into the notes for each round of the game, I wanted a couple of things:

I knew we’d need at least three categories, and so with that in mind, I had the two girls sit down with notebooks to brainstorm characters we could create. They drew drafts of monsters, and once we had a meaningfully sized pile, they sorted them into “Good Guys” and “Bad Guys.” I busted out the box of blank cards (mentioned in Part 2), and they made two copies of each monster onto the cards- leaving an area below the monster clear for me to write in attributes.

I also made some “Good” cards that facilitate commerce. These are Wizards and Witches, and what they want is to trade you magic in exchange for coins or jewels. Different characters have different exchange rates (all of which float via dice roll…) so sometimes you get a really good deal (and sometimes things are expensive). The girls added some good characters too- more on that below. 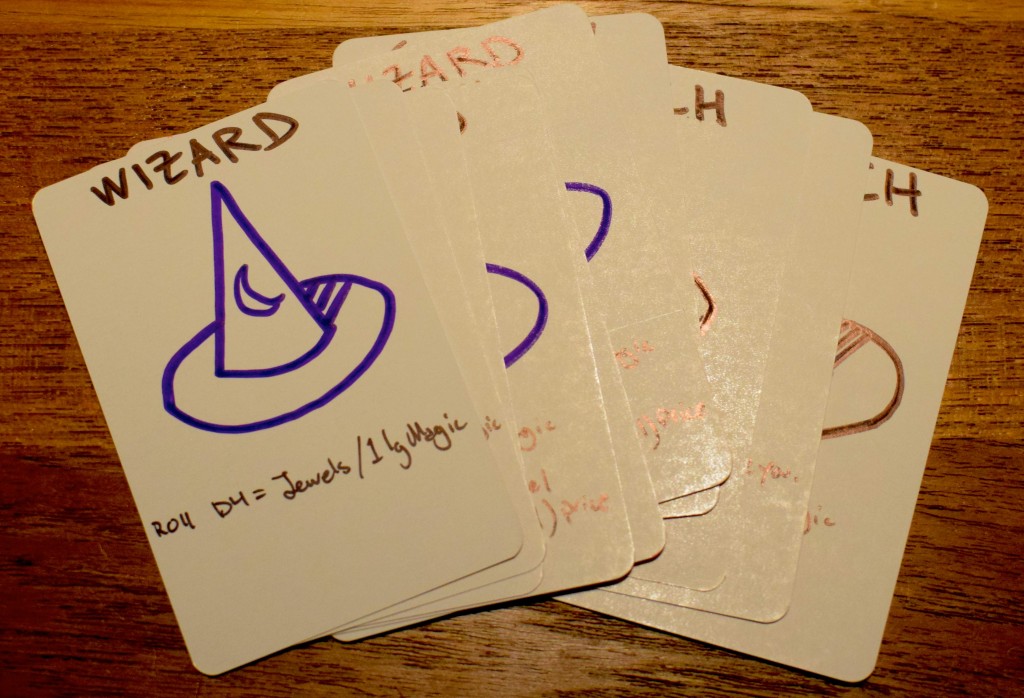 We needed a way to move currency between coins and jewels, so I made a quick stack of “Trader” cards- these characters only move currency between jewels and coins- though I’ve just made some Blacksmith cards (to buys swords from- again, on floating rates), and I’ll be adding a bunch more here as we go on. This category seems to be a good place to introduce new variables. 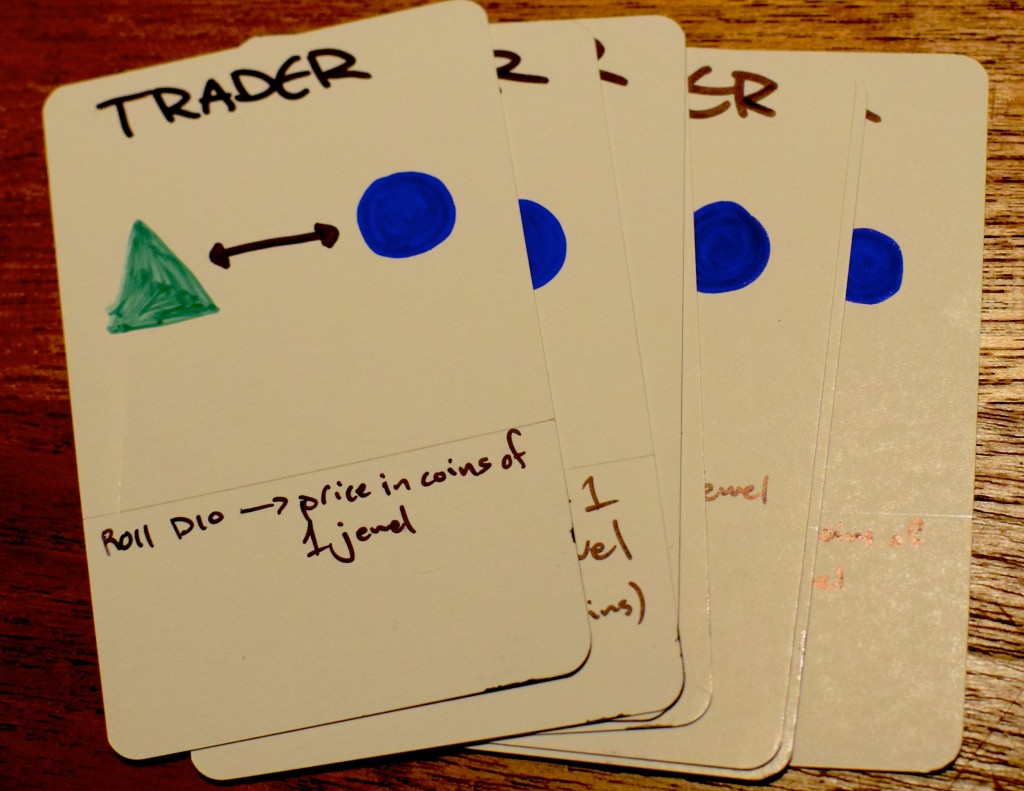 To keep these three (ever-growing) stacks of cards organized, I color coded the backs. Simple. And expandable, because I’m sure we’ll be adding more types of encounters. For storage, each stack gets a binder clip and is put in the same case as all the other gear. 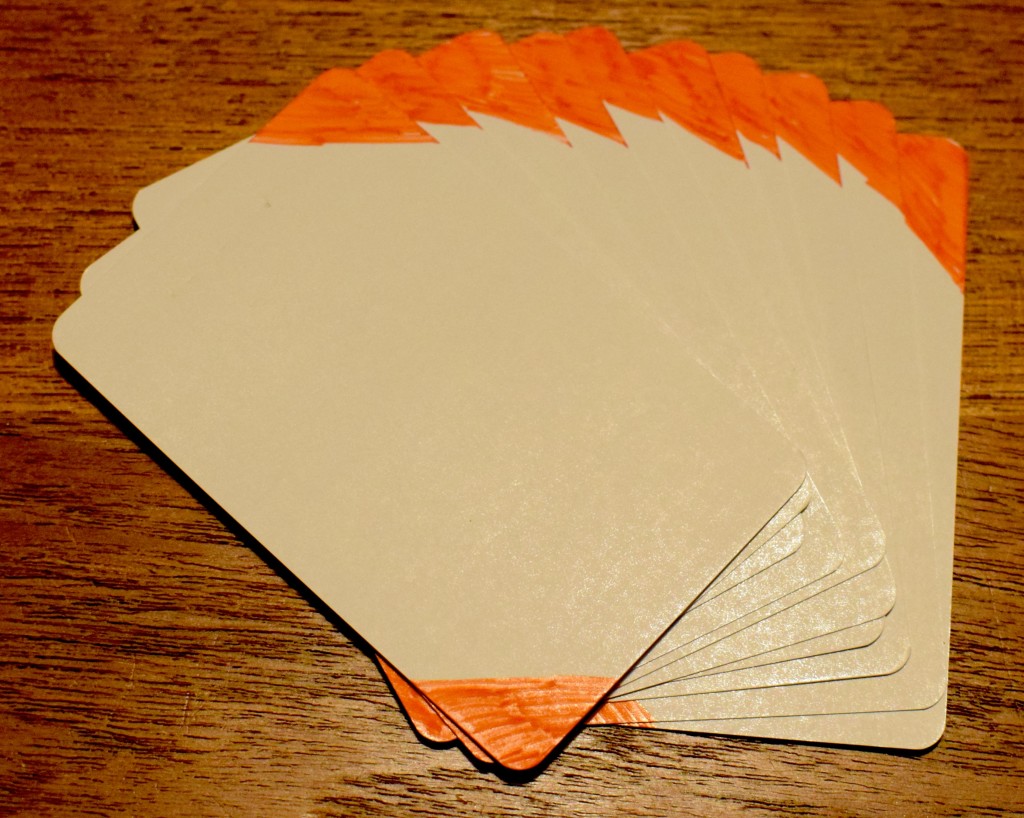 I’ve been really impressed with the creativity the kids have shown- we’ve got cards that add points to your dice roll to move around, cards that make you invisible to a bad guy, and (my current favorite) robot cards you can program to do your bidding in your absence. Those are pretty cool.

There are all manner of bad guys, and I try to write in a single “Boss” or “Big Bad” per round- it’s not on a card, and it’s attributes can (and do) change. This character is usually the last bad guy on a round, and it’s usually guarding a stash of loot- which you’ll likely need, as you’ll be hurting after fighting it. I also try to plan games so there’s a “healer” shortly after this character, as I don’t want them headed into the next game deep in a hole.

There’s a lot still to do- there are always more cards to add, for one. And I’m learning that hard-written numbers for damage/coins/jewels/whatever are less interesting than dice rolls to determine outcomes. I also would like the game to be more group-oriented. Right now, it’s very everyone-for-themselves, and as things get harder I want to push it towards a collaborative effort to reach some higher goal. I’ve not entirely figured out how to accomplish that, but I’ve got some ideas. I also want to make more boards- and I think I’ve got a good idea for easily-made boards. That’d be great because then the kids can help with making maps, and I’m sure they’ll like that. Eventually I also want to try making a modular board that can be shuffled (a la Settlers of Catan…) so every round can be based on the same pieces, but each assembled board is “unique.”

Each “round” of the game takes between 30 and 45 minutes right now- and that’s the sweet spot for the girls in terms of attention and enjoyment. I’m ok with that length right now, but I’m hoping to grow that a bit as they become more and more invested.

All these notes at the end should have made it clear that there’s very likely to be a Part 4 to this series. That’s not a bad thing.